Research Grant Applications are due by January 31, 2023.

What is a native herb?

The definition of a native herb, for purposes of the Native Herb Conservation Committee, follows:
The term ‘native herb' refers to mostly seed-bearing, generally fleshy annuals, biennials, and perennials, aromatic or useful shrubs, vines, and trees that grew naturally in this country, without the influence, accidental or intentional, of man, prior to European settlement. The defining characteristic for these plants is their usefulness, past or present, including their value for flavoring, medicine, ornament, economic, industrial, or cosmetic purposes. Spices, traditionally defined as aromatic parts derived from the bark or seeds of a plant, are also included depending upon their history and uses. Excluded from this definition are crop vegetables and hardwood trees used for lumber.

Non-native invasive plants
A non-native plant is one that is growing in a place other than its natural habitat. Non-native plants can refer to plants that grow naturally in North America as well as plants from other places around the globe. 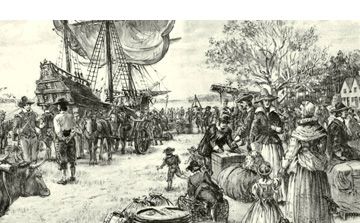 Some non-native plants were introduced accidentally, while others were brought for food, forage, as medicines or ornamentals. Plant seeds have traveled long distances in hay stored as food for livestock on ships (and later discarded at a port); in packing materials used for china and other fragile goods; on hikers boots and horses hooves; on wind currents, and numerous other ways. Many plants are carried inten-
tionally from one area to another, as favored foods or ornamental plants.

Not all non-native plants are undesirable. Those that take root quickly and begin to spread aggressively, establishing themselves over large areas and choking out other, more suitable and more desirable plants, are the ones generally called non-native invasive species. These plants often arrive without the natural predators that tend to keep plant communities in natural balance. Once established, they can be difficult to remove.

An estimated 3,500 species of non-native plants have escaped cultivation in the U.S. Some are now so wide-
spread that they are mistaken as native. Many (think kudzu!) pose a serious threat to native plants and ecosystems. Others, such as Queen Anne’s Lace, are naturalized without interfering with the growth of
native plants.

What does this mean to me?
Invasive plants can alter the natural balance of ecosystems. They can choke out native plants and wildlife habitat, thus endangering the survival of animal and insect species. They displace rare plant species and reduce overall biodiversity, the greatest cause of species extinctions worldwide. Invasive plants also degrade the scenic, agricultural, and recreational value of the land.

What you can do
SP• Consider using native alternatives to invasive species in your landscape.  This list will help get you started.
SP• Remove invasive plants that are already on your property. Left where they are, they will spread
SPAin your yard, to your neighbors, and to nearby forests and open areas.
SP• Learn more about non-native invasive plants and share that information with your neighbors.

Every year, the Native Herb Conservation Committee selects a native herb that deserves more attention due to its unique properties, utility, history, or potential for use. The committee votes this stand-out herb as the Notable Native Herb™.