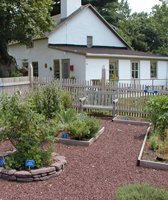 SPThe Delaware Valley Unit’s (www.delvalherbs.org) present garden is located on the Holcombe-Jimison Farmstead Museum (www.Holcombe-Jimison.org)*. The garden is in Growing Zones 6A/6B heading up to 7. To the west, it looks out over a large open field so it can be blasted by both cold and hot winds which can be very drying. An old bench allows the visitor or weary weeder to relax and gaze at the garden and beyond over the meadow.
SPThe Farmstead trustees gave us an area between the 1711 house, the oldest house in Hunterdon County, and the museum’s print shop. Because we were no longer next to a mill, we slowly developed  the new focus of an international culinary herb garden representing herbs that have been brought here by people from all over the world who now call the Delaware Valley home. Although the garden seems small, a good number of international herbs are grown. These herbs are planted in seven sections of raised beds: Europe; Mexico, Central and South America; Africa; India; and Asia. How nice it is to have a visitor recognize a particular plant that grew in her or his mother’s garden and then show us how they use it!
SPWe have an herb plant sale on the third Saturday in May, the proceeds of which go toward our scholarship for a horticulture student at Delaware Valley College. Extra herbs for the garden are part of our plant order. Special plants, like allspice, peppers, sugar cane, and roselle, among others are purchased from other growers. The tender exotics are wintered over in members’ homes. We have an adequate budget for plants and material. We do most the garden work ourselves, generally when the Farmstead is open to visitors.  In 2013 we had the original fence replaced, a major expense. Some of the heavy work of replenishing the soil and adding to the red pebble path has required us to pay for helpers.
SPWe give garden tours and talks when the Farmstead is open on Wednesdays from 10 a.m.– 12 noon and Sundays from 1 to 3:30 p.m. from April through October. (the Farmstead charges a fee to tour the museum – we do not charge). However, we are currently developing a fee per use with the Farmstead trustees to cover insurance needs. In the past we have made an annual donation.
SPWe open the garden for all the Farmstead festivals such as the weekend-long Civil War re-enactment in the large field; Hunterdon County Farmers Honor Roll celebration, Lambertville Open House tour, and the Farm Festival when hand crafts are demonstrated and sold.  In addition we have tours and tastings of the herbs, such as on Herb Day.
SPOur members each have particular strengths but we all share in the planting. It is hard to estimate the total hours spent at the garden; perhaps it is 500, but then herb gardening has its delights.

​BBACK TO GARDENS OF HSA ALBUM